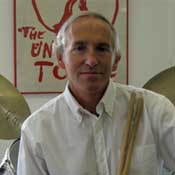 Thomas Briggs, percussionist, graduated from the University of Massachusetts at Amherst with a Bachelor of music degree in jazz studies and music education. He formed the Coast Guard jazz septet the Masters of Swing in the summer of 1989 performing as the band’s drummer, arranger, and musical director. He is an award winning composer and has written and arranged many works for all types of musical ensembles from symphonic wind ensemble to jazz ensembles, as well as many chamber ensembles.

His Duet for Marimba and Piano was lst place winner in the Percussive Arts Society Composition Contest, 1996. He won second prize for Harkness in the annual American Bandmasters Association-Ostwald Band Composition Contest. He was a featured soloist on his Concerto for Drumset and Band on the Coast Guard Band April 2006 tour. Tom is currently the music director at the Community Music School, director and arranger for the student jazz ensemble and piano and percussion instructor.