A Brief History of the Scimonelli/Wiggin Relationship 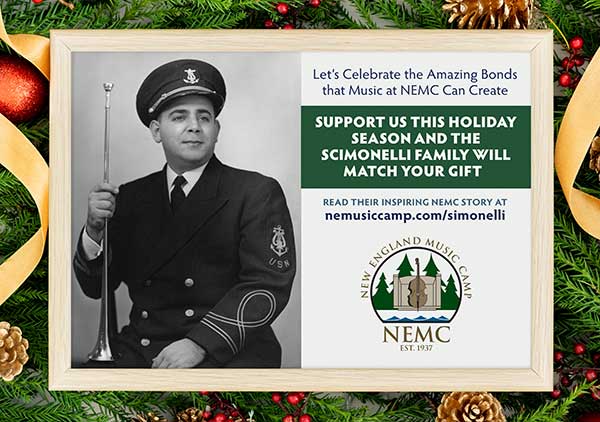 The history of the relationship between the Frank Scimonelli, Paul Wiggin, and their respective families spans over 80 years as of this writing. It is a relationship based on a mutual admiration for the work of both men and a deep respect for each other’s musical abilities. It is also a relationship steeped in the history of music and Music Education in New England.

Paul Wiggin first became aware of a young 18-year-old Gilbert High School cornetist by the name of Frank Scimonelli in 1938. Dr. Wiggin had been chosen as the guest conductor of the All-New England Music Festival band. The festival was held in New London, Connecticut between March 16th and 19th of 1938. As the story goes, Dr. Wiggin was so impressed upon hearing the young Scimonelli perform his solo audition that he insisted that Frank be the Cornet soloist for the grand concert. The festival director’s son, however, was also a Cornetist of high caliber. He insisted that his son be the principal soloist. Dr. Wiggin threatened not to conduct unless Frank was the soloist and a compromised was reached where both boys performed their solos.

A few months later, Dr. Wiggin again heard Frank perform, this time at the New England Music Festival finals held in Burlington, Vermont on May 20-21. Dr. Wiggin conducted his Pawtucket Senior High School band and Frank performed as soloist on “The Flocktonian Polka.” It would be the first of many collaborations together. Frank went on to attend the prestigious Earnest Williams School of Music in New York City and in 1940 join the United States Navy Band, eventually becoming the trumpet and English Post Horn soloist.

In 1937, Paul Wiggin became the second Vice-President of the newly formed New England Music Camp in Waterville, Maine. The original Eastern Music Camp had failed in 1934 and a new, vigorous group of investors were determined to bring music and music education to Central Maine. Dr. Wiggin enlisted the aid of many prominent musicians of the day, in an effort to enhance the offerings at NEMC, and Frank Scimonelli would begin a life-long association with the camp. 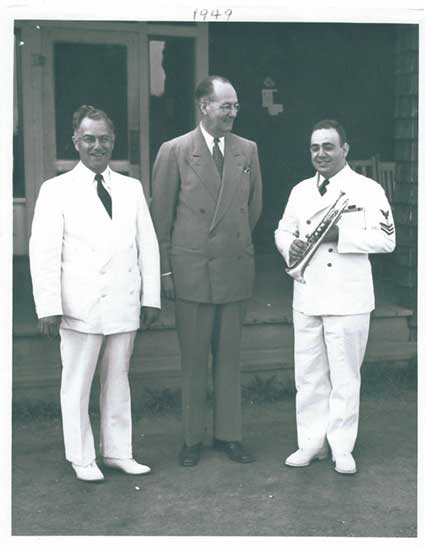 By the late 40s, Frank had become a nationally known soloist on the trumpet and the English Post Horn, a valve-less, bugle-like instrument that was played with only the lips and breath. Dr. Wiggin and Frank continued to correspond with each other and in 1949, Frank was invited to perform for Governor Fredrick Payne at the Governor’s Day festivities. From 1949 until 1996, Frank came up to camp and performed as a soloist, clinician, and conductor of the Symphonic Band.

In the late 1950s, Dr. Wiggin developed some significant trouble with his hearing. He told Frank of his difficulties and Frank immediately sprang into action. Using his myriad connections with the Navy, Frank was able to get Dr. Wiggin into the then National Navel Medical Center in Bethesda, MD (now known as the Walter Reed National Military Medical Center). An experimental operation was performed, where a nerve was transplanted from his wrist to his inner ear. Dr. Wiggin regained a significant portion of his hearing and was forever grateful to Frank for this act of kindness.

When Frank Scimonelli came to camp each summer to perform, the word spread like wildfire. Audiences filled the grove in front of the Bowl-In-The-Pines Stage and an encore became de rigueur. As Jeanette Wiggin was fond of saying, “they just loved his swagger and bravura!” The Bangor Daily News of 1955 said, “[Scimonelli’s artistry] on the ancient post-horn is amazing.”

Paul and Frank continued their friendship until Paul’s sudden passing in the summer of 1969. Paul’s son Davis Wiggin was appointed Assistant Camp Director in 1969. He became the Director of the camp in 1977 and his wife Jeanette, Assistant Director. With Davis and Jeanette at the helm, Frank continued to perform and hold clinics each summer at NEMC until his untimely passing in 1996. Throughout those years, his children and grandchildren have attended Camp, enjoyed the beauties of Lake Messalonskee, and were tutored by some of the greatest teachers and pedagogues in the United States.

The Scimonelli’s and the Wiggin’s share an undying friendship that lasts to this day. 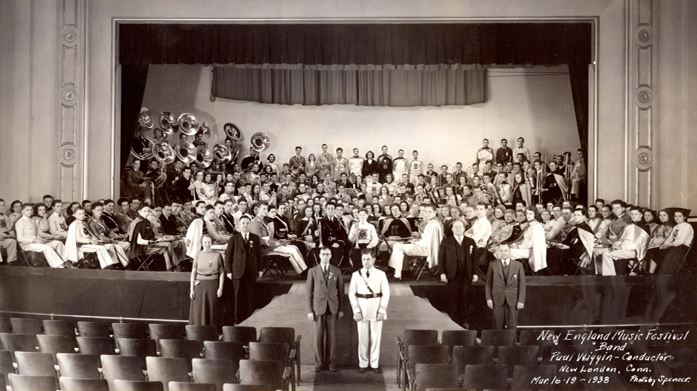